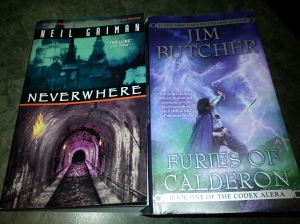 I have not charted out any details of what I would like to say to you.  I have just finished these two books, in succession and feel I’d like to talk about them with someone.  You are it.  This is likely to be quite a rambling bit of carrying on, but given your penchant for words, I am hoping you won’t mind.  Or will at least endure.

First of all, I haven’t the time or energy to continue at this pace. I have a very busy life.  For instance in the last three weeks alone I have prepared my students for finals, marked all the frenzied last minute assignments that come rolling in from students who are obviously unaware that deadlines mean ‘dead should you pass the line’.  This clearly isn’t true – that one dies having crossed any such line.  In retrospect we should obviously obliterate that term from our dictionaries.  So I have taken with great heaving sighs all these last minute assignments and marked them.  I have tutored a score of individuals in preparation for their finals.  I have prepped and counseled and organized herds of teenagers in order to MC and manage silent auctions and bake sales and beverage tables and dessert servings and silver collections and gymnasium decorating all in anticipation of the school’s Winter Showcase in which students exhibit their fine talents in the arts – it was a splendid event, well attended, standing room only, thank you.  This evening alone nearly wiped me and my colleagues off the face of the pedagogical earth.  I have hostessed a weekend of Christmas festivities (admittedly late but busy with all the happy busyness that is Christmas nonetheless) for 26 family members – that entailed a great thrust of cleaning and cooking and cleaning and cooking and cleaning and cooking not to mention laughing and visiting and et cetera et cetera. I have coordinated final exams ad nauseum.  I have marked final exams.  I have wrestled mentally and emotionally with the trials that assessment procedures bring to bear upon the decision maker (me).  This is not to mention the ridiculous amounts of stress induced by having to consider who shall have the great pleasure of repeating another semester with me (this was cause for much wining, h omitted quite intentionally, which in itself can consume hours of time).  And in all that time I have inhaled your books.

I’m not sure with whom to begin.  Mr. Butcher, I have been long familiar with your texts.  From the first Dresden file I have been hooked.  In particular the scene in which dear Harry emerges from the shower wearing only his towel, his hair lathered in shampoo, only to have to fight – what was it?  A frog demon? – at the door whilst his date sipped wine behind the couch and the cat sat warily upon the cabinet? I laughed so hard my eyes watered.  I remember well:  I was in the school library, perhaps on a prep? And I had to leave to find a student who could appreciate the scene.  I found one such student in front of the office and trapped her in a chair while I read the excerpt, laughing uncontrollably and undoubtedly losing the child’s confidence in my overall soundness. I think I had to go find tissues to wipe my eyes after this bout of feverish infatuation.

I quickly introduced Harry to my husband who became a keen fan, reading every single File including the anthology of backstories and asides.  I lost my husband, Mr. Butcher, for quite a time.  I went to bed alone.  I ate alone.  I watched “Big Bang Theory” alone.  All because of you. In this phase all he could talk about was the pizza the pixie ate, or the ashes left of the vampire’s house, or the White Council’s discoveries of Harry’s secret past. I smiled and nodded, watching his vacant eyes and autonomic tweaking for more. When Hubby emerged from his addiction a half year later he was wrecked.  Wrecked, Mr. Butcher, wrecked, I tell you.  It was all I could do to draw his attention elsewhere to other authors. I’m not sure he’s recovered yet, to be truthful.

In this time I amused myself by sampling other offerings: Bacigalupi and Boyden, Kathleen Winter and Emma Donaghue, Coehlo and Bryson, Tolkein (again), Follet and Crummy. Loved.  Loved them all. Along with all the fine and delicate chocolate that must accompany book reading….

And while casting about for some fresh blook (sorry – blood/book) to devour I am irritated by the nonstop Facebook advertising, interrupting my socializing to tell me I must read some Gaiman.  In particular, I must “The Ocean at the End of the Lane”.  Annoyed by Facebook’s invasion of my personal privacy, scanning my likes and advising me about my own preferences, I mustered all my determination and ignored your text, Mr. Gaiman.  I put you off for days, perhaps weeks!  But the digital advisers were adamant and equally determined:  images of your novel popped up everywhere – on my Facebook pages, in the Globe and Mail margins, in reviews on CBC (I think it was CBC…).  The barrage was relentless until finally I broke down nearly sobbing with defeat and looked up the silly thing to see what it was all about.  And then I bought it from Amazon.  And then it arrived at my house in those enticing cardboard boxes with the smiling face on it.  I opened the hardcover and …

… disappeared.  I was gone.

This is not a challenging text by any means:  brief, simple.  But oh so delicious.  Like the fine chocolate mentioned above. Since my husband was in absentia I took “The Ocean…” to school and decided to read it to my grade tens.  They also became addicted and soon we could barely get any work done for all the whining in class:  “Are we going to read today?”  “What happened to the witch, Ursula?” “How could there be a hole and not be a hole at the same time?” It became ridiculous. When I, by unfortunate circumstance, was drawn away from my charge and had to write instructions for the substitute teacher I needed to be very clear that no matter how much the students pleaded the sub was not to indulge them in reading the novel for the entire hour.  It was so bad that in the end I had to leave them hanging for a whole week in order to prep for final exams but indeed after the exam was over and the dismissal announcements were made and they were free to leave and never lay eyes on my face again, the entire class of sixteen year olds voted to stay an extra 45 minutes in order to finish reading the thing.  Shameful and unnatural, that kind of urgent need in the face of otherwise highly desirable freedom.

But there you have it.  I will not hold back the truth.  It was just that bad, Mr. Gaiman.

Lettie Hempstock vs the Hunger Birds….

And here the backstory ends.  I was in a bookstore over the New Year’s searching for some appropriate novel for my godson:  fifteen, not an avid reader particularly, though he does love a good story as much as anyone.  I was conferring with a fellow in the store who seemed well enough read about what he felt such a boy might like to read.  He brought me over to a section to recommend a text by I don’t remember who because I wasn’t paying attention:  there, on the shelf, where they shamelessly display covers amidst spines, sat “Neverwhere”. Mr. Gaiman, I picked it up.  And the fellow noticed. He commented that it was a riveting read and recommended it.  I held it in my hands with the half dozen other books and meandered among the aisles, bamboozled by my senses.  In a moment of clarity I wondered if Godson would enjoy Harry as much as Hubby did, and wandered over to see if Mr. Butcher’s books were being hussied about and sure enough, … but here Harry’s spines were modestly displayed and catching my attention was the immodest spectacle that was the fully exposed cover of “Furies of Calderon”. I picked it up also.

I’m embarrassed to say that I bought them all.  But I did.  I tried to sort through them and employ some sort of rational filtering process, but Hubby was with me and, seeing my evident distress, he very gallantly gathered them all in his arms and, taking my hand, led me to the till.  I just handed over the money quite mutely and brought them all home to my little reading chair where I sat shivering with them and stroking their pages.

Well, truth be told, Hubby did garner a few along the way.

I ate up “Neverwhere”. I inhaled “Furies of Calderon”. I stayed up late way way way past my conservative and life-preserving bedtime to see what would happen to poor Richard or Tavi – would they discover their purposes?  Would their identities be hidden away forever?  Would the fine and not so fine women in their lives be mangled by the vile angels and beautiful beasts they encountered? And how is it that both Doroga and Bernard had to struggle against the evil among their own people in order to save their vulnerable teenaged children?  And these same children were saving them?? I tossed and turned wondering if Door would avenge her father’s death, or if Odiana would emerge a better witch than before? How could Isana keep so many secrets and who was the Angel of Islington really?? And did the Count have a secret past???

Marking piles got shuffled to the far end of the desk, friends got mysterious texts telling them I was not up to leaving the house, wine got ignored and went stale in its glass!  Husband became dusty in his chair!  Even the cat stopped coming by for squudges!  This is not cool, Misters Gaiman and Butcher!!

And so here I am.  I have finished the wee marathon.  I put these books away on my shelves, modestly displaying only their spines so as to not shock the guests who pass unsuspectingly through the room.  I am committed now to reconstructing my life.  There are pieces strewn about all over and *sigh* they will be attended to.

Perhaps I should start a survival support group?

In closing, Misters Gaiman and Butcher, may I repeat myself?  I do not have time nor energy to continue at this pace. Please do not so tempt me again with your wares.  Thank you very much.